Home›Archive›CIVIL: There are no conditions for free elections

CIVIL: There are no conditions for free elections

Civil-Center for freedom published an analysis titled:"Free elections are the only chance for restoring democracy and the rule of law". The analysis was sent today to the representatives of the international community in the country.

Just before the press conference of the three MEPs, Biljana Everett, representative of Civil - Center for Freedom gave a statement about the general political situation in the country, the conditions for holding free elections and recommendations for the international community to overcome the political crisis.

"We are deeply determined that the given deadline for preparation of early parliamentary elections in April 2016 is too short. Our strong recommendation given in June 2015 is to extend this period to 18 months or more, so that the necessary conditions for holding free elections may be created. In particular, we recommend this period to start from the day of the formation of the transitional government. This is the only way for overcoming the political crisis and for restoring democracy in the Republic of Macedonia.

Prime Minister Nikola Gruevski undertook the obligation to carry out urgent reform efforts in key areas related to the rule of law, the media and electoral processes, not only have they not been implemented, instead, the abuses and undemocratic governing have only deepened over the last year.

At the moment Macedonia is still torn by a political crisis, accompanied with aggressive and dirty political campaigns, strong pressure on the electorate, media manipulations and abuse of public resources and of the administration.

The situation in Macedonia is not improving, whereby, the ruling parties remain deaf to all the requests and recommendations of CIVIL and of series of relevant civil society organizations and experts. The ruling parties continue to violate human rights and suppress freedom of expression and media freedom.

The negotiations are not providing results, and in government remains the largest part of the structure upon which no one can even consider to implement any form of a democratic, citizen control. This is the structure that is directly responsible for the long-term political crisis and for the erosion of democracy, the rule of law and human rights.

Specifically, what is left in function is the machinery that is governed by Nikola Gruevski and his cousin Sasho Mijalkov, who left the position Director of the Administration for Security and Counterintelligence only formally. The regime of Nikola Gruevski continued with the well-known practices of abuse of the administration and of the public resources, political corruption and media manipulations.

The government continues with pressures, blackmail and threats against the opposition and neutral citizens, Gruevski is forcing his campaign through the media, he is indebting and is acting carelessly with taxpayers’ money, with which he is, in fact, buying their loyalty. At the same time, through an expensive and dirty campaign, Gruevski’s campaign is satanizing the opposition, the civil society and – often – the international community.

One of the main points of aggressive populism of Gruevski is to demonstrate that he enjoys loyalty by the people, that his governing is more than that, that he is a savior. This is not difficult for him to achieve, having in consideration the unlimited resources that he seized. Hence, apart from implementing criminal policies, he is also criminalizing relations in society, and is making the citizens accomplices in his own transgression.

CIVIL has been demanding an end to the political persecution since 2010, release of all political prisoners, and conducting early local and presidential elections simultaneously with the parliamentary elections, when there will be minimum conditions for them to be free.

Unfortunately, all attempts of civil society representatives failed, including those of CIVIL, in terms of having a transparent process for overcoming the political crisis that involves more stakeholders, and not just the leaders of the four main political parties.

Therefore, the only recommendation that can be delivered at this moment to the international community, Washington and Brussels, is for them to the give the green light to postponing the elections, but without delaying the deadline for the resignation of Prime Minister Gruevski."

Saso Ordanovski and  Alexandra Jozic-Ilekovikj gave a statement for CIVIL as well. 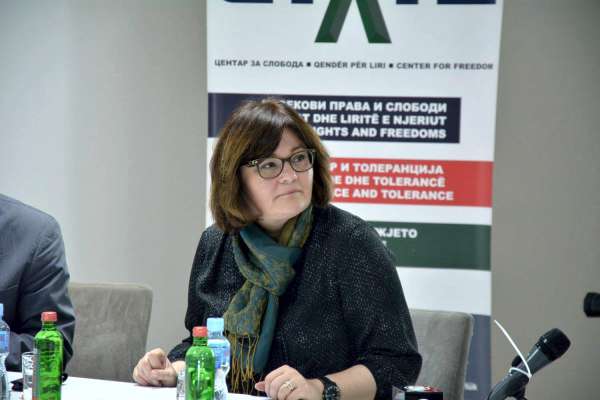 Jozic – Ilekovic for CIVIL: The Voters ...

Ordanoski for CIVIL: The conditions are important, ...