Home›Archive›CIVIL: Elections need to be postponed, the abolition withdrawn, and a transitional government to prepare free elections

CIVIL: Elections need to be postponed, the abolition withdrawn, and a transitional government to prepare free elections

The main recommendations of CIVIL – Center for Freedom, for overcoming the political crisis in Republic of Macedonia, are for the elections to be postponed until conditions for free elections are created, the abolition to be withdrawn and a for a transitional government to prepare free elections.

In the past two months, the parties in power not only did not demonstrate a political will and did not undertake activities to implement the political agreement, but rather put additional efforts and public resources to prevent its implementation and maintain the occupation and abuse of the system.

Negotiations are extremely difficult due to continuous obstructions of the parties in power, the abolition of President Ivanov and the almost complete blockade of the institutions that are under party dictate.

The situation with the media is also one of the most serious consequences from the failure to fully implement the political agreement, which are still under the fierce control of the government. The state has not separated from the party, while the parties in power have continued with abuses, political corruption, violation of human rights and freedoms, political discrimination and structural violence. The State Election Commission has failed to rise above party interests, despite the efforts of its independent experts. This has led to a delay in the deadlines and a poor revision of the Voters Register.

CIVIL – Center for Freedom allocated monitoring teams and an expert team, which have been continuously observing and analyzing the situation in the country for 17 months now, more specifically, as of January 2015.

There are still party pressures, threats and blackmailing of the electorate, primarily on the socially vulnerable categories of citizens, as well as on public administration employees at the local and national level.

In CIVIL, hundreds of reports and statements of citizens have been gathered, who testify and give evidence on the massive abuses of the power of the ruling parties. In the education, party soldiers pressure the staff, but also the children, through their parents. In the health care sector, party affiliation means an opportunity for better treatment, while the health care staff that are not in the sympathy of the parties in power, suffer everyday pressures and discrimination. Racketeering continues in the economy. Our analysis lead to the conclusion that part of the funds that are drawn from the economy are directed in this period towards the servile media. Economic entities cannot even think of sponsoring an independent or oppositional media, fearing inspection services, which are still used as a tool for blackmail and coercion.

Parties in power have not stopped trying to divert the public’s attention away from their own abuses and processes for which they need to be held responsible. In addition to media manipulations, the background of the “patriotic games” is more than obvious, more specifically, the reinforcing of inter-ethnic tensions. For now, efforts to divert the public’s attention and manipulate with ethnic and religious themes remain unsuccessful.

CIVIL demands from the authorities and the institutions to stop serving the narrow party interests and to take their hands off the fundamental human rights and freedoms, among which is the right to a peaceful protest. The government is only deepening the crisis by organizing the counter protests.

Macedonia is still a country of political prisoners. The leader of the political party Levica, Zdravko Saveski, is also now in custody, like many other journalists, political leaders and others who are not like-minded, who are still suffering from the persecution of the politicized judiciary in the country.

This all needs to stop right now!

These positions of CIVIL were presented at the beginning of the public discussion „Pluralism and Political Crisis“, which was held on May 10, 2016.

The event was held within the framework of the Project “Free Elections for free Citizens”, supported by the Ministry of Foreign Affairs of the Federal Republic of Germany and “Forward” – Elections monitoring project, financed with German funds from the Stability Pact for South Eastern Europe. 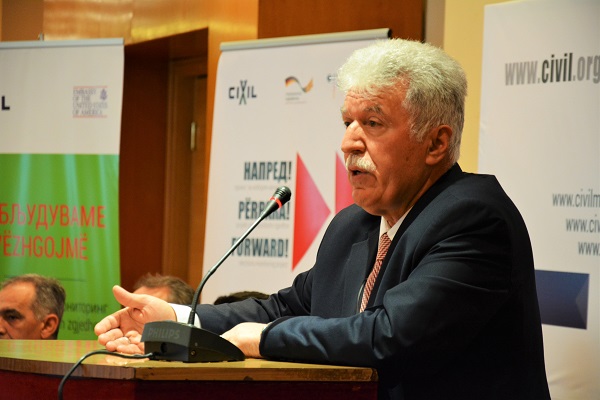 Sarac: May the citizen live, so that ... 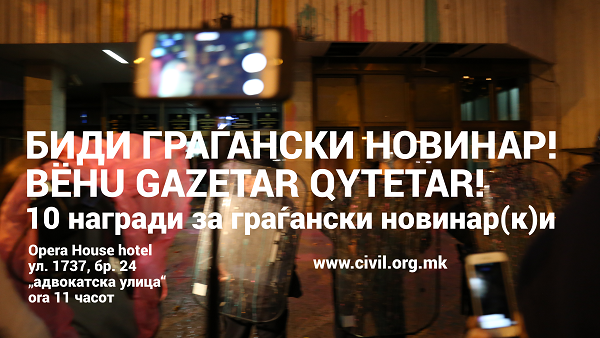 How citizen journalists see the protests?