We are deeply determined that the given deadline for preparation of early parliamentary elections in April 2016 is too short. Our strong recommendation is to extend this period to 18 months or more, so that the necessary conditions for holding free elections may be created. In particular, we recommend this period to start from the day of the formation of the transitional government – was one of the recommendations of CIVIL – Center for Freedom, published on June 9, 2015, with which we demanded urgent measures for overcoming the political crisis and for restoring democracy in the Republic of Macedonia.

Seven months later, Macedonia is still torn by a political crisis, accompanied with aggressive and dirty political campaigns, strong pressure on the electorate, media manipulations and abuse of public resources and of the administration. The situation in Macedonia is not improving, whereby, the ruling parties remain deaf to all the requests and recommendations of CIVIL and of a series of relevant civil society organizations and experts. The ruling parties continue to violate human rights and suppress freedom of expression and media freedom.

Contrary to the Agreement for overcoming the political crisis (Przino June 2/July 15) with the mediation of the international community, with which Prime Minister Nikola Gruevski undertook the obligation to carry out urgent reform efforts in key areas related to the rule of law, the media and electoral processes, not only have they not been implemented, instead, the abuses and undemocratic governing have only deepened over the last year.

CIVIL demanded a resignation of the government nine months ago, as the only logical conclusion to the political crisis, responsibility for the abuses and the crime for which there are indications in the wiretapped conversations that were released by the opposition, and then to have a transitional government of experts established that would conduct quick, but essential reforms.

That process implies revision of the Electoral Code, changing the electoral system with which Macedonia would become one election unit and introducing open lists, revising and improving the Voters register, reform of the State Election Commission, separation of the party from the state, reforms in the media and media regulation in order to eliminate the party dictate on the media, establishing a commission or institution for investigation based on the wiretapped conversations, investigation into the security crisis in Kumanovo, and conducting free elections at the end of that process.

The negotiations are not providing results, and in government remains the largest part of the structure upon which no one can even consider to implement any form of a democratic, citizen control. This is the structure that is directly responsible for the long-term political crisis and for the erosion of democracy, the rule of law and human rights.

Briefly, with this kind of implementation of the political agreement, the agony in the Republic of Macedonia only continues.

More specifically, what is left in function is the machinery that is governed by Nikola Gruevski and his cousin Sasho Mijalkov, who left the position Director of the Administration for Security and Counterintelligence only formally. The regime of Nikola Gruevski continued with the well-known practices of abuse of the administration and of the public resources, political corruption and media manipulations.

Guided by the experience of the long-term monitoring of elections, of socio-political processes and of the situation of human rights and freedoms in Macedonia, CIVIL insisted nine months ago on implementation of the priority measures, which are connected to a series of other requirements that were not discussed at all during the negotiations.

CIVIL has been demanding an end to the political persecution since 2010, release of all political prisoners, and conducting early local and presidential elections simultaneously with the parliamentary elections, when there will be minimum conditions for them to be free.

Unfortunately, all attempts of civil society representatives failed, including those of CIVIL, in terms of having a transparent process for overcoming the political crisis that involves more stakeholders, and not just the leaders of the four main political parties.

Let us recall that the political crisis started with the parliamentary elections in 2008, and culminated with “Black Monday” on December 24, 2012, with the violent removal of opposition MPs and journalists from Parliament in order to, at any cost, approve the extremely high budget in the ever poorer Macedonia.

The negotiations of the four leaders of the main parliamentary parties really did lead to the signing of the political agreement, however, the obstructions of the government to every attempt for its implementation continue to endanger the very idea of holding free elections on April 24, 2016. Basically, the agreement for overcoming the political crisis has transformed into a reward for Prime Minister Gruevski, a means of extending his political life and maintaining undemocratic policies and practices in the country.

The government continues with pressures, blackmail and threats against the opposition and neutral citizens, Gruevski is forcing his campaign through the media, he is indebting and is acting carelessly with taxpayers’ money, with which he is, in fact, buying their loyalty. At the same time, through an expensive and dirty campaign, Gruevski’s campaign is satanizing the opposition, the civil society and - often - the international community.

If we look at CIVIL’s experience of only the past three years,  not to mention the numerous other organizations and institutions at the national and international level, we will see that the alarm has been switched on long time ago. CIVIL revealed a great deal of electoral fraud in the reports “Unscrupulous struggle for power” in 2013 and “Democracy Disqualified” in 2014, followed by numerous analyses and recommendations on the situation of human rights and socio-political processes. In this sense, we can single out the analysis and the review of the challenges and recommendations published on September 17 “Case of Macedonia: quick recap” , as well as recent reports concerning fierce political pressure on employees in the public administration and public enterprises, as well as intensified party-political pressure on teachers.

One of the main points of aggressive populism of Gruevski is to demonstrate that he enjoys loyalty by the people, that his governing is more than that, that he is a savior. This is not difficult for him to achieve, having in consideration the unlimited resources that he seized. Hence, apart from implementing criminal policies, he is also criminalizing relations in society, and is making the citizens accomplices in his own transgression.

Therefore, the only recommendation that can be delivered at this moment to the international community, Washington and Brussels, is for them to the give the green light to postponing the elections, but without delaying the deadline for the resignation of Prime Minister Gruevski. 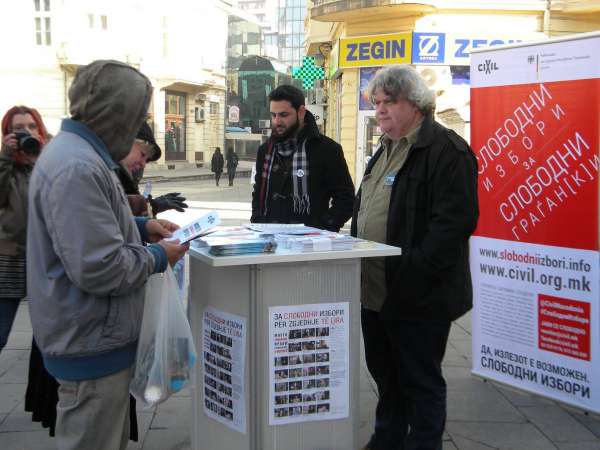 Dynamic start of the year for CIVIL 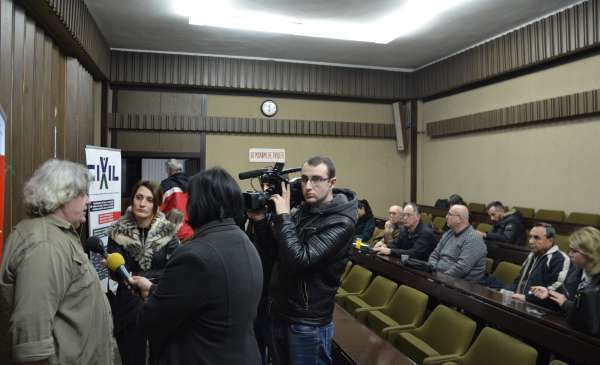 The citizens of Shtip demand changes!