Home›Archive›CIVIL response to accusations of TV Sitel: Facts of reality

CIVIL response to accusations of TV Sitel: Facts of reality

Here is a selection of groundless accusations and attacks of TV Sitel against CIVIL, launched on August 5, 2015.

TV Sitel claims that CIVIL is in a network of 46 organizations.

Fact #1: CIVIL – Center for Freedom is officially established in 1999 by citizens of Macedonia, without any foreign support in the beginning. It is established by independent intellectuals, artists and journalists, active since 2005. As a human rights organization, CIVIL has been critical towards any government. The organization is part of NGO networks with incomparably larger number of member organizations than only 46 that are indicated in the “investigation” of TV Sitel.

Fact #3: CIVIL’s annual budget is, unfortunately, rather low in comparison to the complexity and size of its multi-year strategy and annual programs. CIVIL has received grants of little over 500,000 EURO in four years, which makes an average of 130,000 EURO per year.

Fact #4: CIVIL is supported by many more donor organizations and institutions (see list below), only including the Foundation Open Society Macedonia (FOSM), pointed as Soros by TV Sitel. Directly, FOSM granted CIVIL in 2011 with 4,500 US dollars in order to support the Globus online magazine, and with 10,000 US dollars in 2014 within the Free Elections Project (12% of the whole project budget). In total, CIVIL has received grants directly from FOSM in an amount of 14,500 US dollars or 10,909 EURO, not 524,569 EURO.

Fact #5: The truth is that CIVIL has a considerable public influence. It is also true that SDSM is open to suggestions from the civil society organizations, including CIVIL, and has publicly declared that. Civil society organizations, including CIVIL, are proud to be able to produce quality analysis and recommendations on various burning issues in the country.

TV Sitel claims that other Soros organizations engage Xhabir Deralla as an expert in other projects.

Fact #6: Although it is unclear what TV Sitel and their media companions understand under the phrase “Soros organizations” or “Sorosoids”, we are proud to announce that CIVIL’s personnel, including Xhabir Deralla have been invited as speakers, lecturers, supporters, co-organizers, presenters, panelists etc. in a great number of occasions and by many organizations and institutions in the period “investigated” by TV Sitel. This includes “Soros organizations”, but also many other organizations and institutions out of this “investigated” circle. CIVIL representatives were even invited by the Ministry of Interior (MOI) to contribute to a consultation process within the Law on Weapons. Is the MOI also a “Soros organization”?

TV Sitel claims that CIVIL is a founder in several other non-governmental organizations.

Fact #7: CIVIL is a member of various civil society organizations networks, as indicated above, but has not founded an organization. Same counts for Xhabir Deralla. TV Sitel only manipulates, trying to downsize the civil society and the democratic initiatives. Fortunately, the pro-democratic initiatives are growing by the day. We are aware that TV Sitel’s bosses are worried about that.

TV Sitel claims that Xhabir Deralla appears in the party projects “Citizens for Macedonia” and “Ajde”.

Fact #8: Xhabir Deralla, as well as other members of CIVIL are proud supporters of human rights, peace, anti-gun, anti-discrimination, pro-democratic, pro-LGBTI rights and many other movements, organizations and democratic initiatives in the country and worldwide.

TV Sitel claims that “Soros organizations” quote each other.

FACT #9: CIVIL’s representatives are quoted by an enormous number of media in the country and worldwide. Just Google it.

TV Sitel claims that CIVIL goes a step further by demanding to take part in the political process to overcome crisis in Macedonia.

Fact #10: The truth is that CIVIL makes a constructive and creative contribution to the crisis management process and demands more transparency. CIVIL also demands that decision-makers should take civil society’s recommendations into consideration. CIVIL also proposed that civil society organizations should take part in the negotiations, as active contributors or as observers. Comments and recommendations of CIVIL that are in that spirit are publicized on its website. One of the proposals by CIVIL is the demand that the state agency that regulates TV and radio broadcasters has to be put under control of civil society in the wide sense of the term.

TV Sitel questions the “legality of the revenues of Xhabir Deralla”, probably meaning the budget of CIVIL, adding that “he is defended by the other 40 Soros organizations and their partners from some embassies”.

Fact #11: TV Sitel is actually questioning the legality of the embassies in the country, those of the countries that support the Republic of Macedonia financially and politically for decades now. In this sentence, TV Sitel continues with an ad hominem attack, trying to diminish the institutional dimension of the organization. Moreover, it says that CIVIL’s “revenues”, more precisely Deralla’s “revenues” will be defended by 40 organizations.

Except exposing the absurdity and silliness of this claim, we can say that there is no need for “40 Soros organizations” to defend “revenues” that mainly come from other international donors. It is obvious that the intention here is to intercept the reactions from the civil society and the diplomatic core, which is inevitable. Then, TV Sitel will go with the style: “We told you so!”

However, CIVIL’s budget, expenditures, project activities and everything related to the organization are information that are already on the organization’s website. Indeed, these information are actually the main source for TV Sitel to only twist and manipulate what we publicize, and present it as an “investigation”.

TV Sitel claims that “when nothing else passes, Xhabir Deralla becomes an Albanian by profession”.

Fact #12: Apart of being vulgar and bizarre, this claim - having in mind the country’s context - is a blatant expression of hate speech, giving an ethnic context to the whole story, stirring ethnic intolerance.

TV Sitel claims that Deralla and CIVIL had been granted by the Broadcasting Council with a project worth 27,000 EURO to make a film. Furtherly, TV Sitel claims that “Deralla, on behalf of CIVIL took that money, but the film was never made, which is an example of a classic fraud with public money. After the scandal was discovered a lawsuit was filed in 2013 for recovering the embezzled money.”

Fact #13: The Broadcasting Council has never granted CIVIL with a grant.

TV Sitel claims that “CIVIL is part of the underground political network of the Soros foundation. Its staff consists of only four people, yet it has a revenue of over 500,000 EURO.

Fact #15: The staff of CIVIL is much larger. Only in Skopje, more than 20 people are actively working on implementation of projects. The number of persons engaged actively with CIVIL at this moment is over 100 throughout the country. In times of elections, this number rises over 300. It will rise in the near future to thousands.

TV Sitel puts a rhetorical question: “How much of this money has been paid off, to whom, and whether any taxes have been paid, we do not know.”

Fact #16: All taxes are paid neatly and timely. CIVIL does not use cash money, except for pay-tolls and very modest daily allowances for the teams that travel across the country.

TV Sitel continues: “The financial controls that will follow will be under the strong attack by the Soros underground network and by some of its ties to the diplomatic world.”

Fact #17: We have seen this kind of threats in Serbia in times of Milosevic’s rule. These kind of threats have been issued many times through media under control of the ruling party in our country, as well.

Fact #18: This is a blatant and rude accusation that Soros has developed an “underground network” to which they attach “diplomatic world”.

TV Sitel claims that most citizens have never heard of “Civil” and its activities.

Fact #19: CIVIL is welcomed everywhere in the country as a trustworthy civil society organization, by all communities, politically neutral citizens and members of all political parties.

TV Sitel published even more accusations in the online article attached to the video feature broadcasted in the news on August 5, 2015. These attacks are predominantly directed at Xhabir Deralla, summing up into a ruthless accusations, insults and labeling Xhabir Deralla and the civil society as “political underground”.

Fact #20: TV Sitel manifests lack of basic knowledge of how democracy works. We believe that they could start reading definitions on what is democracy, civil society, advocacy, civic education and a few other basic terms. They need to learn about basic facts on how all this works. CIVIL is available to hold a basic course on democracy, human rights and rule of law to the editors, journalists and whoever of those circles is interested. Free of charge. 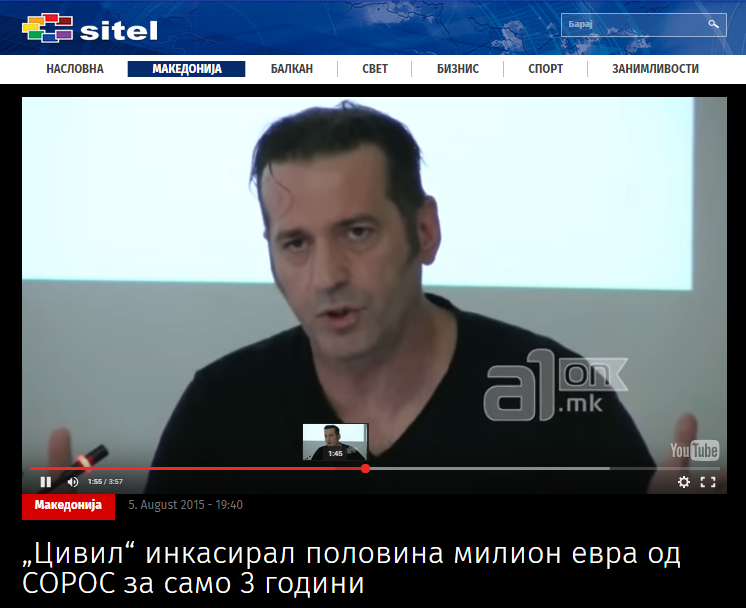 TV Sitel in a ferocious attack against ...

TV Sitel in a ferocious attack against ...