CIVIL – Centre for Freedom held a successful public debate today in hotel "City Park" in Skopje, with representatives of political parties that are not part of the negotiations to overcome the political crisis. They developed a rich discussion and argued on the reasons that have been pushing Macedonia for a decade to a dead end. Petrit Saracini opened the debate saying that it is important to hear the position of the whole society and that the goal is to hear different views of the parties which are not included in the Treaty of Przino to overcome the political crisis.

The president of CIVIL, Xhabir Deralla pointed out that there are no small parties and that all political parties civil society organizations and citizens have the right to contribute to solving the current crisis. He added that not only that the agreement to overcome the political crisis is not being implemented, but is being breached continuously. The situation on the field is much worse than before the signing of the agreement.

According to Sinisa Stankovic, editor of CIVIL Media, the media in Macedonia are under tight control of the government: "We will continue to fight, so that the media can get out of the iron embrace of the partisan state, through our production on the Internet and if needed, as we have done before, with 'live news' or direct meetings with the citizens on the squares of Macedonian cities.

After the presentations of the representatives of CIVIL, Liliana Popovska from DOM opened the debate. According to her, the dissolution of the Parliament is an intrusion into the treaty to overcome the political crisis. "We asked for a broad involvement of all parties and civic organizations, but our voice was not heard", stated Popovska.

Vlera Ejupi from the Movement for Reforms in DPA, appealed that the imposing of authority through violence should stop. She stressed that the educational system creates political party soldiers and destroys young people: "The word freedom is a sacred word. We have no freedom", said Ejupi.

Janko Bacev from NDM, spoke about the shortcomings of the revised Electoral Code. He ponited out that the former Prime Minister Nikola Gruevski and the opposition leader Zoran Zaev are deceiving the citizens by inserting provisions in the Electoral Code that are catastrophic for the smaller parties. "We should not worry about the opposition, but rather break the two-party system that reigns in Macedonia," considers Bacev.

Faton Aliti from PDP said that Macedonia is in a deep economic, social and political crisis. "The Przino Treaty will provide only minimum conditions for free and fair elections, but the  elections will not mean victory for anyone", Aliti said.

Safet Bishevac from the former Sandzak League, accused the Bosniak party in coalition with VMRO-DPMNE for being just another of their keychains and stated that such parties usually get a few job positions for being obedient. He suggested that, if the political crisis is still not resolved through dialogue, the only way for the citizens to demand democracy and conditions for free and fair elections would be by protests. "We'll have to press the current political establishment to postpone the elections by protests", said Bishevac.

Samka Ibraimovski from the Roma party PCER, claimed that the Roma community is the most abused in Macedonia. He said that elections are possible only if there is a census, adding that Macedonia will be better off with a single constituency. "I propose to check the health insurance cards register and create the Electoral list according to them", said Ibraimovski from PCER.

Zdravko Saveski from Levica (The Left), an emerging party, believes that the Treaty of Przino offers only the minimum for restoring of the democracy. "We must absolutely insist on free elections. We must insist on absolute democratic elections and pluralism, while the government should have a sense for criticism, "said Saveski.

Afrim Gashi from Besa said that Macedonia constantly generates new crisis. "The crisis keep repeating themselves. Macedonia is a dysfunctional state that does not serve its citizens", Gashi said.

Marjan Ognenovski from United for Macedonia called for ethnic unification to demolish the regime of Nikola Gruevski. "We have a mutual goal, we need to consolidate and unite inter-ethnically" said Ognenovski.

Zulfi Adili  from Uniteti warned of the loss of confidence of Albanians towards the state institutions. "We must overcome the period when the slogan was 'Gas Chambers for Shiptars'", said Adili, adding that "younger generations have left Macedonia because we have rulers who are above the Constitution, the institutions and the state."

Ivon Velickovski  from the  Liberal Party said that the materials submitted by CIVIL correspond with the analysis of his party. He noted that they need support from citizens for postopning the elections, so that we wouldn’t have to think about elections again after these elections. "Elections must happen to end this crisis. Without free elections, the crisis will continue. It is necessary to reset the system”, stated Velickovski.

During the debate, citizens were asking questions on Twitter, using the hashtag #CIVILevent.  of the questions for the representatives of political parties was: How do you plan to attract the young people?

Velickovski: "Instead of attracting, we provide a platform on which they can address and represent their interests."
Gashi said: "We are a party that is led by young people."
Bishevac: "Both young and old people have the same problem. Young people are moving out of the country”.
Ejupi: "We have a real problem with mutual understanding. The University of Tetovo was destroyed in the last few years. "
Adili: "We have it in our statute. At least 30 percent of the members of the leadership of the party have to be young ... All communities should seek an answer from the state institutions. What are they doing for the young people?"
Savevski: "Young people have lost their hope. They do not leave the country just because of a lack of jobs, but also because the society does not offer any opportunities for their development”.

Leaders and representatives of the parties answered the journalist's question: Do you expect consolidation of the bloc of political parties that are against the government and a possible stronger coalition?

Bacev: "We must overcome the two-party system".
Adili: "We must work with the youngest, to learn that diversity is valuable. The idea of ​​consolidation is good and necessary. "
Bishevac: "I agree with the idea of ​​Macedonian version of DOS (the Serbian opposition coalition during Milosevic reign) "
Ognenovski: "We have one goal. We should consolidate and unite on a multi-ethnical level ".
Popovska: "Since the elections in 2013, we are preparing for elections. Naturally everyone wants to participate independently in the elections. We will present our program on the 7th of February, but if uniting is necessary, we will join. Our condition would be further change in the Electoral Code and the balanced participation of women in politics."
Adili: "Gruevski and Zaev need to work on prevention of accidents towards the Albanians."
Velickovski: "We envisage changes to the Constitution that would represent substantive equality. If we know the goal, go ahead, let us talk. Let us begin that conversation now. "
Gashi: "This regime must fall. If we unite, the first step should be the destruction of this system and second, to agree what kind of Macedonia we truly want ".
Savevski: "The struggle for freedom cannot be monopolized. The young people are enormously   disappointed and distrust the political parties. "
Ibraimovski: "It is necessary for Macedonia to become a single constituency."

The last Twitter question was whether the media is unfair to the "small" parties, which was complemented by the moderator Saracini with the question - "How to change the attitude of the media towards them?" Attendees had various suggestions and views.

Aliti supported the proposal of Peter Vanhaute towards the media issue, Bishevac proposed for the public service MRT to organize debates every evening that will include all parties, Ognenovski proposed to form a television because it is hard for the smaller players on the political scene to fight for space in the commercial media, Ibraimovski accused the media for ignoring his party, Popovska believes that the media space should be distributed according to the Electoral Code, and by liberating of the media.

Velickovski emphasized that if a coalition is achieved they can win more than 100,000 voters, a fact that could not be ignored by the media. According to Gashi, Macedonia lives in informative darkness, Adili believes that in Macedonia media serve for making classical business, and the media are not fulfilling their role. Saveski stated that we should not leave the choice of the director of MRT to the members of Assembly, but we must involve the public as well as the other factors. 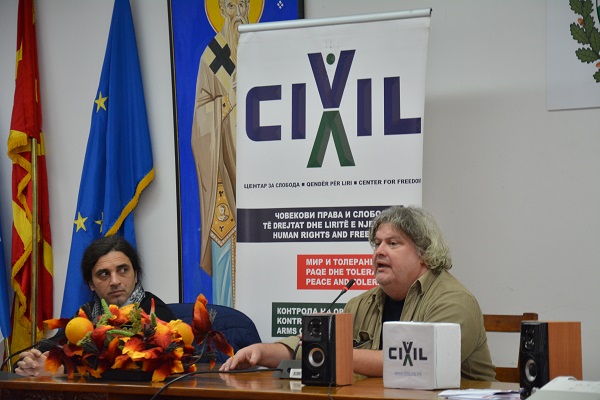 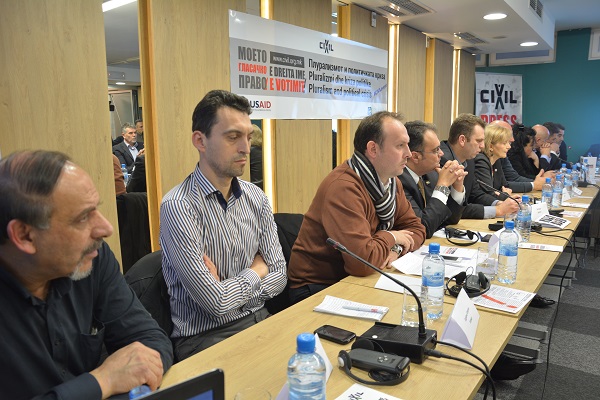 A lesson on political dialogue