Home›Archive›WEEKLY ANALYSIS: Who will cut the “Gordian knot” for Macedonia?

WEEKLY ANALYSIS: Who will cut the “Gordian knot” for Macedonia?

There are 11 more weeks remaining until the date scheduled for early parliamentary elections that are to put an end to the long-term political crisis. However, in Macedonia there is no visible progress in the media sphere or in the preparations for fair and credible elections, whereas obstructions in the work of the Special Prosecutor’s Office (SPO) still continue. The Constitutional Court has still not decided on the constitutionality of the SPO, while the media are producing scandals instead of ensuring objective and balanced informing. There is also the open question on whether the number of voters will be regulated in the Third, Fourth and Sixth electoral unit…

For almost a week, the highest legislative body has been like a theatrical scene playing a parody of democracy, according to the government’s scenario.  The Members of Parliament from the majority, below all ethical norms, have been “lashing out” at Special Prosecutor Katica Janeva with mockeries and sarcasm. The government’s media follower’s focus is on lace and not on the work of Janeva and the criminal acts arising from her work and the work of the SPO… In a situation when the state has no capacity to create preconditions for solving the political crisis, the Colorful Revolution is mobilizing again. The political situation of Macedonia is very complex, perhaps even more complex than before the Przino Agreement…

The Colorful Revolution in defense of the SPO

Today at 5.00pm in front of Parliament, the pro-democratic Macedonian public will again mobilize itself in order to express support to the work of Special Prosecutor Janeva and her colleagues, who have been painstakingly struggling with the politicized judicial institutions – in order to bring the truth to light.

Former Prime Minister Nikola Gruevski, leader of VMRO-DPMNE, stated that if he were to receive an invitation from the Criminal Court, that he would appear as a witness in the “Pouch” case, in which the leader of the oppositional SDSM Zoran Zaev is accused. But, the fact is that the Criminal Court hasn’t even submitted an invitation to Gruevski for the last hearing. Otherwise, it is unclear how Gruevski, who is a witness in the case, “refuses” for there to be trial for his greatest political rival and greatest threat to be taken off the throne after a decade of ruling – the oppositional leader Zaev. The interconnection between the judiciary and the government is more than obvious in this case and the others led by the SPO, for which it still cannot obtain the evidence from other court instances.

The pro-government media and MP’s orchestrated in Parliament, certainly according to the government’s scenario, are trying at every cost to derail the work of the SPO. So, for them, the image of Prosecutor Janeva is most important: how she sits, the kind of wardrobe she wears…More than the crucial issues on solving the political crisis: Who is guilty and involved in the criminal acts arising from the “Wiretapping” affair – from the materials recorded on audio tapes, which the oppositional SDSM mostly disclosed at a press-conference and which are known to the public.

And why have they now lashed out at the Prosecutor with “sticks and stones”?! Probably because among the first suspects is no one other than the most prominent Macedonia politician, but also the most controversial, who manages to retain power for years only with populism. Will Janeva succeed under all the pressures to cut the “Gordian knot” for Macedonia?! Will she have enough courage to handle the politicized institutions and those sowing fear and threats, and to bring out the truth on where the criminal acts and serious crimes have been committed in Macedonia? According to the annex to the Przino Agreement, the Macedonian 18 national broadcasters are key to creating a roughly objective image of the Macedonian reality. They were supposed to “bombard” the public with objective truths in the period until the elections, meaning in a period of 100 days, with balanced informing and without a criticizing tone, but with a critical tone, through the objective journalistic prism, through which the untruths and lies are broken, and to present to the Macedonian public accurate and timely information.

However, except for the establishment of the ad-hoc body, the five-member Temporary Commission for which high fees are being spent but has no contribution in the work of the media and in restoring objective journalism on the scene, nothing has changed for the better in the media sphere in Macedonia. On the contrary!

From the government’s “kitchen”, and in the labyrinths of the public service – the First program service of MTV, an unprecedented and utterly inhuman by all professional standards scandal has been produced, with the interview recorded with Prosecutor Janeva. Publishing the fumbles of the recorded interview just shows how much MRTV is a tool of the ruling party.

In its attempt to harm the image of and disgrace responsible editor Santa Argirova in public, (a political decision of the opposition SDSM, which is to ensure balanced and objective informing in the news program of MTV), the government is just showing how unsuccessful the Przino Agreement is, and how hypocritically the document has been signed. The media processing, the approach to this interview by the pro-government megaphones, does not at all refer to the personal and professional capacity of Janeva, but is only a confirmation to the politicized public service, for which citizens are paying a fee for its work, whereby the State Revenue Office is charging this fee with executive decisions even from citizens who have lost their sight. That is the Macedonian media paradox at the moment. On top of the entire media farce is the case of journalist Zoran Bozinovski, who has been in detention for five months, accused of espionage. He has chosen to be on a hunger strike in exchange for his freedom, sending a message to the Macedonian and international public that he will not withdraw from his intentions. This decision of his, and the fact that he lost 20 kilograms in prison and that because of his profession, more specifically, his treatment by the Macedonian judiciary, he is risking his own life, has alerted the public and the European Federation of Journalists. However, the Criminal Court did not allow the General Secretary of the Association Ricardo Gutierrez to visit Bozinovski. He stated that he had never seen such a case, for a journalist to be accused of espionage and stressed that court authorities, even in Turkey, have allowed him to visit imprisoned journalists, which is not the case with Macedonia.

The European Federation of Journalists announced that it would alert the Council of Europe on the Bozinovski case, whereby the Council will request an explanation from the Government, which is a signatory to the recommendations of the Council in March this year.

The Bozinovski case raised the question: why, for example, isn’t the Macedonian judiciary requesting detention for senior government officials who are accused of serious criminal acts, for which President Gjorge Ivanov announced pardoning?! Will the electoral map of Macedonia be reshaped?

All, or at least most of the citizens in Macedonia are expecting early parliamentary elections, which would mean an end to the political crisis. This indeed was the goal of the Przino Agreement, to have the Voters Register cleared, to have the phantoms removed and according to all standards to have fair and democratic elections.

The State Election Commission (SEC), after all the deadlines for reporting “phantom voters” expired – 39.502 were recorded, announced that 30.447 identities from this list would be entirely deleted as non-existing voters. But, that the citizens would be given another opportunity ten days before the elections to make checks in the Voters Register and to request for interventions to be made, or for their general information to be placed on the active list, that is, on the Voters Register, because they are not “phantoms”.

Some citizens, among them law expert Professor Dr. Mirjana Najchevska submitted criminal charges against all members of the SEC, and to the Republic and Basic Public Prosecution, but there has been yet no response.

This certainly gives and image of the Macedonian judiciary in relation to the electoral process, in times when the only item on the agenda of the majority of Macedonian citizens is having fair and credible elections.

On the other hand, the question remains whether the electoral map of Macedonia will be reshaped. The efforts of SDSM for Macedonia to be one electoral unit were not accepted, but will DUI’s efforts be accepted in terms of having the number of voters changed in the Third, Fourth and Sixth electoral unit, where the threshold has been surpassed, and for which the SEC had actually submitted a notification to the Working Group in Parliament. Today, the Working Group will finally decide upon this issue, which according to DUI can be solved if there is political will, and if it is a precondition for fair and regular elections in Macedonia.

Velickovski, LP: The party order has to ... 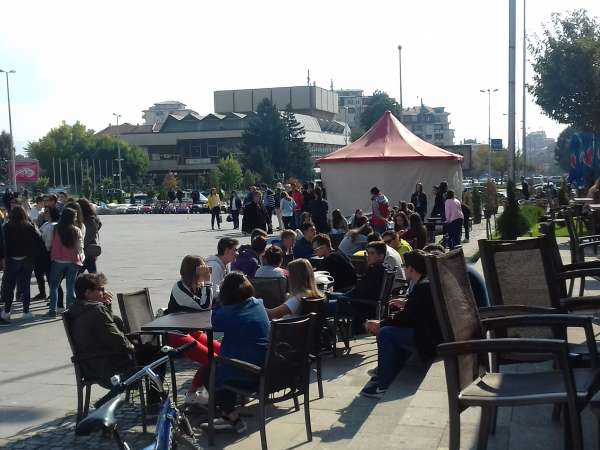