Home›Archive›WEEKLY ANALYSIS: Elections or deepening of the crisis?

WEEKLY ANALYSIS: Elections or deepening of the crisis?

The eyes of the Macedonian public are focused on the Gruevski-Zaev-Ahmeti-Taci leader’s meeting that is scheduled for August 31 (Wednesday), when finally, what was agreed with the last annex of the Przino Agreement needs to be finalized and a date set for elections. And then have the transitional government start functioning, which for three months should conduct defragmentation of the Macedonian institutions in order to have free, fair and credible elections that will mean victory and restoring of the Macedonian democracy.

According to the largest opposition party SDSM, there are no more obstacles for scheduling early elections. VMRO-DPMNE as of April has the opinion that in Macedonia there are conditions for elections, though will decide on Wednesday, because it will depend on the “determination of SDSM to overcome its fear of facing the citizens”. While DPA was left without a public comment regarding this issue, DUI believes that conditions have been fulfilled and that the political crisis should finish.

But, have the main preconditions been fulfilled: quality revision of the Voters Register and media regulation, only through the establishment of an ad-hoc body and appointing a chief editor of the national broadcasting channel of MTV? The revision of the Voters Register has completed. The State Election Commission (SEC) adopted the report, according to which 30.467 of a total of 39.502 citizens have not justified their right to vote, and will thereby be removed from the Voters Register. During the period for registration July 26 to August 19, the SEC received 8.922 applications, of which 8.901 applications were accepted, and the rest refused by the legal department. Three or more members of the SEC, within 10 days after the deadline for registration, may request additional checking for any of these persons.

With the Law on Amending the Electoral Code, according to the political agreement, the SEC was obliged to conduct a process of active registration for 39.502 people for whom inconsistencies were determined during the administrative and on the ground checks. The SEC say they have done everything in their power to inform the citizens for this registration.

However, for the civil society organizations it remains unclear why the SEC, during this entire period of the revision of the Voters Register, it has not responded to any of the numerous questions concerning the quality of the process of revising the list with disputed voters.

CIVIL – Center for Freedom, an organization that actively monitors the election process, after many unsuccessful attempts to obtain the requested replies from the SEC, warns that the “members of the SEC are not accountable to their party leaders, but to the law and the citizens of Republic of Macedonia. CIVIL has no intention of confronting the most relevant institution that has an obligation to provide conditions for free elections, but it cannot allow itself to be silent to the issues and requirements in terms of the functioning of the institutions in compliance with the Constitution, the laws and the international law”. The body for media regulation cannot be self-regulated

A week before the leader’s meeting, the first, expected obstacle arose in the work of the ad-hoc body for media regulation, although it is still not even established. The four members, appointed by the two largest parties in the Macedonian political bloc, two from VMRO-DPMNE and two from SDSM, cannot reach an agreement and select the fifth member, who should be ethnic Albanian, and who should subsequently be appointed as president of this Temporary Commission for a three-month early elections media monitoring. But, this comes as no surprise to the public. The appointing of cadres from party headquarters, is only logical to produce a negative epilogue from the very first working meeting

Hence, the ad-hoc body is once again requesting political intervention, while eyes are again focused on the political headquarters. And in this vacuum, the solution is being waited upon from there, instead of selecting an experienced and recognized journalistic expert who will fight for the dignity of the profession and the basic media commitment for objective, true and balanced information to the recipients, to the citizens in all the regions of the country.

Politicians are reading this problem with their political vocabulary. For VMRO-DPMNE, the ad-hoc body “must not succumb to the pressures of Zaev”. Whereby SDSM consider that “VMRO-DPMNE does not want free media, objective informing and elections at which the citizens will freely give their vote”.

Nevertheless, some progress has been achieved in the media sphere. The Government withdrew the draft-law on media and information campaigns from parliamentary procedure, and officially, according to the Ministry of Information Society and Administration this was done in order to conclude the text. However, it is a fact that this draft-law caused much turbulences among the public, the opposition and among the trade associations. The Association of Journalists of Macedonia are strongly opposed and refuse to participate in the debates, because with this law “corruption in the media will be legalized”. The public awaits court resolution for the offenders, while the SPO demands time for investigation

Even though the public expected things to be resolved much earlier, not only completed cases concerning government officials involved in the “Wiretapping” scandal, the Special Prosecutor’s Office (SPO) has not completed one investigation until now. There have been obstructions in every possible way from the very beginning of the establishment of this super-Prosecution.

Moreover, according to the SPO, 18 months is a very short deadline for full and objective investigations in the cases resulting from the recordings of the illegal wiretapping. Therefore, they urge Parliament to extend the deadline for completing the investigative procedures. According to the Law on the Special Public Prosecution, the deadline for filing charges will end towards the middle of next year. Accordingly, in the next 10 months the SPO needs to file charges for over 20 investigations that it is currently leading.

As of December, seven investigative procedures have been opened for the cases: “Titanic”, “Torture”, “TNT”, “Fortress”, “Transporter, whereby the cases “Puch” and “Spy” are currently under the competence of the SPO, but there are no specific charges. Although the prosecutors demanded arrest for nine persons, the court approved only for two suspects. For the chief of the Fifth Department of the MOI Goran Grujoski, who for the case “Fortress” was later held in house arrest, and upon Ivanov’s abolition, was released by the court. Currently, Bitola Mayor Vladimir Taleski is the only one who is under house arrest. Citizens barely survive, on the margins of the political crisis

Macedonia last week again resembled a huge arena that the government uses with the purpose of winning as many votes as possible in the next elections. Prime Minister Emil Dimitriev, almost always accompanied by his “colleague” – shadow prime minister Nikola Gruevski, leader of VMRO-DPMNE, uses every opportunity to create an image of an investment expansion in Macedonia, and of enormous new job creations. Through the lens of the media that are orchestrated by the government, mass information is being published again on incredible economic projects.

And true, in these 20 years, the Zletovo mine has restarted for the second time. The “Bulmak” company employed 300 people, and 700 new jobs have been announced. But, at the same time, 180 citizens from MZT “Learnica” (Foundry) are protesting for not having received their salaries for months, while the (state) law executors are blocking their accounts. Young people are leaving the country every day, refusing to live further 10 years of agony, as a result of party employments and lack of real criteria for employments.

Up to 60% of workers in Macedonia, according to the statistics of the Central bank, have salaries lower than the average, while 16,2% have a salary equal or slightly higher from the average. Macedonia is among the countries with the lowest salaries in the region.

Then again, the government knows this very well. Now, prior to elections, help and assistance are sought everywhere. But, the united Macedonia Diaspora complained and requested for the economic promoter of Macedonia in Washington Oliver Ristik to be withdrawn, for having reprimanded the expatriates with ugly words because they had not collected enough donations for the victims in the floods and for not coming back to Macedonia more often and investing in the country.

And, according to British “Guardian”, Macedonia is one of the countries in which shoes from luxurious British brands are made (Geox shoes), while workers receive illegally low salaries in the amount of 8.000 denars and work in poor conditions and with overtime. But, without media regulation, the Macedonian citizens will continue to be consumers of the government media fata morgana that Macedonia is a “world economic haven”. 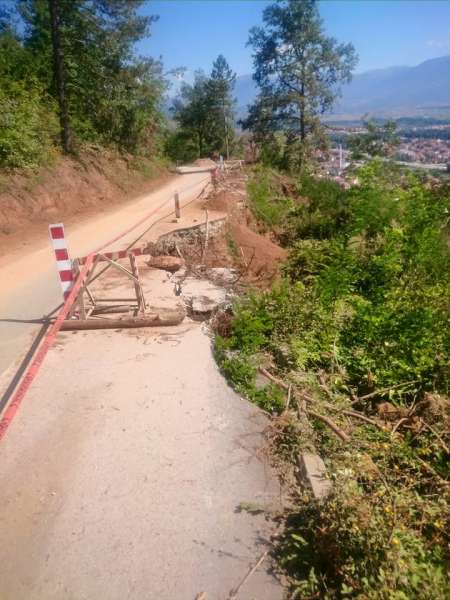 Landslide near Knezino takes out half of ...

CIVIL with unconditional support for the SPO