Home›Archive›Velickovski, LP: The party order has to fall!

Velickovski, LP: The party order has to fall!

The Liberal Party of Macedonia will be going to elections independently, focusing its priorities to the neutral electorate, to which it will propose a program for changes in the party order of the “big four”.

CIVIL Media spoke with Ivon Velickovski, President of the LP, on the role of civil society and the media in the electoral process, on the political oscillations in the race to win the elections, on the abuses and on several other pressing issues.

CIVIL Media: Can you briefly present the program of your party?

VELICKOVSKI: The priorities include systematic functioning, creating a sustainable and predictable government, restoring of real parliamentary democracy in the political process in Parliament and, nevertheless, democratization of political parties. It is clear to us that this crisis will not end with these elections, but that the political process will last. Certainly, the basic issues concerning the economic functioning and consolidation of the economic system are among the main goals of the Liberal Party, and that is a process that will also last.

CIVIL Media: Will you deal with topics concerning interethnic relations, which are obviously a leading topic in almost all of the election processes, and how?

VELICKOVSKI: These are topics that are unavoidable and necessary for a developing democracy, as ours is, and it is certainly important to constantly treat and promote them.  For us it is easy in that we adopted the basics of the Election Program of the Liberal Party at the Congress that was held on April 26, 2015, and you know that we defined our three priorities as 3I: investment, interaction and integration. The part regarding interactions, or interethnic relations, is included in our political system program.  Hence, the basic concept is building a political nation, more specifically, for the citizens of Republic of Macedonia from all ethnic groups to have equal rights and equal opportunities, but also equal opportunities with the affiliation and Macedonian citizenship they have.

We are aware of the need for promoting such interethnic relations, and that interventions need to be made in many legal regulations, in many texts that regulate these issues and it is because of this that the civil concept along with the secularity in the country are the foundations on which we want to build an integrative society and a society that will not be exclusively for just one of its members, regardless of their ethnic, gender, sexual or any other orientation. CIVIL Media: You stated in several occasions that the Liberal Party of Macedonia will go to the elections scheduled for December 11 independently. What are your expectations for the elections? What irregularities do you expect in this electoral process?

VELICKOVSKI: In conditions with such political clientelism that has been established in Republic of Macedonia, I believe that conditions for truly fair, democratic and credible elections have not been met. However, the “Przino four” decided as they pleased, in order to preserve the “party order”, and that is precisely why one of our goals is a change that party order. More specifically, the order that actually created the crisis, the one that disfigured the institutions and prevented their functionality, and, in that direction, I do not have high expectations in regards to the standards that will be fulfilled.

On the contrary, I think that at the end, we will all say that they were, fair, democratic elections, but at a minimum level. There are no minimum and maximum conditions. There are either conditions or there are no conditions. But, a political party exists in order to participate in a political competition and to draw voters to support a political program and an idea. In that sense, the announcement we made that we would be going to elections independently, we had already made at the Congress of the Party, and we are continuing with our preparations, regardless of all the oscillations.

I would like to point out that there have still not been any talks with any of the structures in terms of the so-called consolidation, though I do see some initiative from various sides. These initiatives, at this moment are obviously just vocal ones, and I cannot notice any essential process.

Our offer was to create three fronts in the opposition, or to create three blocks that would oppose this trench that VMRO-DPMNE and DUI have created. Specifically, we believe that it is necessary for the existing coalitions and those that are being formed now to function, and for each of them to address their voters. Also, this civil center, these citizens that are around 200 and 300 thousand, they are demanding something different, so we have to draw them to the elections and they have to know why… Not to force them to go, but rather to have them go vote because of their own determinations and because they want to change the “party order” of the Przino four.

CIVIL Media: Does this mean that you will try to do so, but that the remaining political parties, including the ruling party, could resort to abusing the electorate?

VELICKOVSKI: I do not recall the Liberal Party having ever abused the voters in these 25 years, but we have surely heard of all the abuses that have happened in the past ten years, and probably even more years. But what we have at the moment does not allow us to see any separation of party and state, or that the same methods will not be applied…The counting of votes at the end has always been a problem in Macedonia. We will see how many places will be left without electricity, in how many placed the polling boxes will be returned after the counting has been carried out, and how many minutes of the meetings of the electoral boards will be missing. I know of sixteen that are still missing as of 2011!

CIVIL Media: What are the messages of your party to the civil society? How do you see the role of civil society in the electoral process?

VELICKOVSKI: Excellent question. I thank you for the opportunity to outline that the safety of our democracy is questioned! I am not only speaking of the state’s security in terms of external factors. The safety of our democracy in Macedonia is threatened! As to civil society, some have the impression that it is in some way party related, and I do not exclude that possibility. In the end, the citizens have the right to determine for themselves their political orientation.

I leave it up to the citizens to determine if the manner in which it was carried out is good or bad. However, civil society in Macedonia has given an impulse that the political parties couldn’t have. They have opened issues that the parties were afraid to open! In that sense, I urge the citizens, and civil society, to be citizens and a civil society. Everyone will vote upon their own belief, but expectations are high and they will be able to recognize partners. The political parties can be partners within the framework of a political and institutional process. Everyone will make the right choice, and I believe in the civil society in Macedonia. CIVIL Media: How much will the media contribute or do harm in the implementation of the electoral process, and in which manner?

VELICKOVSKI: In this electoral process, as before, the media will be fiercely limited by all legal and factual constraints that have been imposed upon them, according to the current economic and political situation. With these ad-hoc bodies, as things have started, all we will be doing is measuring time. This means that the media will not be in a good position to achieve its goals and reasons for existence.

But, I will say again that politics are not an easy job, and that the challenges are great.

I hope that the media will be able to step forward and truly represent those participating in the electoral competition. Certainly, I know that there are limited resources, limited time, short campaigns, but I think that we missed the opportunity to bring the media into a functional condition in order for them to be able to perform their true social function with the process that was started in Przino, but just cannot end.

CIVIL Media: How do you see the role of the State Election Commission and do you consider that this institution will meet the expectations and the legal responsibilities and powers in implementing the electoral process? Especially if one takes into consideration that the SEC has representatives of only the big political parties? Do you think that the experts within the SEC will balance the power of the parties in this institution?

VELICKOVSKI: I do not have any great expectations from the State Election commission. It is an electoral commission of the four parties. The experts are helpless in this respect, and I do not believe that they have the possibility to move within their expertise, but more that the entire process needs to end. Przino will end just as it was created. Because of these reasons, I do not expect that we can really rely on the capacities of the SEC, and I have been saying this from the start. Let me remind that the Voters Register was closed by the four parties. The report was submitted to the four parties…Well then, there they have the SEC, let them rejoice on their formal success!

CIVIL Media: Will the problems be resolved with the elections in December, or will they just get deeper?

VELICKOVSKI: It will be a phase in solving the problems. There are numerous problems, and now the real problems will surface, right after the elections. We will be entering a new phase of the crisis as of December 12. Therefore, in choosing the representatives of Parliament, it is important to take into account who should be on the inside, and for citizens to decide according to their own conscience.

The crucial challenges will begin, not on the 11-th, but rather on the 12-th of December. They have already started. It can be noticed among the public, there is great reasonableness, recognizing of problems… Hence, for the people it is still important whether inertia and orientation only for the big blocks will overpower. If this should happen, the problems will continue and will multiply, because those who created the problems will not be able to solve them by themselves. 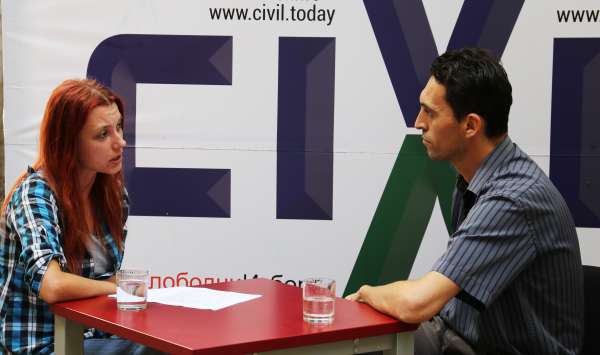 Saveski: There are minimal conditions for holding ...

WEEKLY ANALYSIS: Who will cut the “Gordian ...