News digest of main events in Republic of Macedonia: A Session of the State Election Committee || Johannes Hahn: Future reform measures are necessary! || Bozin Pavlovski: I am not a signatory to Ivanov’s proposal  || Court administration continues to strike || (VIDEO) The Anti-Corruption Commission  – a leader in the region in not working || The Special Prosecutor’s Office continues to work || New IRI survey || Negotiations will continue || The MOI has an obligation to protect the citizens || The Colorful Revolution is counting down.

Session of the State Election Committee

With 9 votes “for” and none “against”, without any discussion and debate, during one of its last sessions the members of the State Election Committee handed themselves around 3,600 euros for their engagement in the Committee. Each member of the SEC receives a monthly salary of about 1,000 euros. Regarding other topics, the result is devastating – the SEC has spent too much time and money, and yet there is no result. A consensus concerning these issues is achieved very rarely. But, not when it comes to reimbursements.

The Macedonian government and political parties made a commitment to respect the Przino Agreement and urgent reform measures are necessary, especially those regarding the minority issues as well, said the European Commissioner for Enlargement Johannes Hahn.

SDSM leader Zoran Zaev today met with Polish Ambassador Jacek Multanowski. At the meeting they discussed the current political situation in Macedonia, the plan for overcoming the crisis and the Euro-Atlantic Integration of the country, is stated in the announcement of SDSM. Zaev and the Polish Ambassador jointly concluded that the withdrawal of the abolition represents a good opportunity for opening the path for justice to be restored.

Bozin Pavlovski: I am not a signatory to Ivanov’s proposal

“Nonetheless, I am not a signatory to the proposal of Gjorgje Ivanov. Someone else put a signature instead of me. Even though many years have passed since then, I tried to put the pieces of the puzzle together” says academic Bozin Pavlovski. “Mr. Nikola Gruevski needed the proposal with signatures of intellectuals, because in the circle of his close associates there was resistance to Ivanov, who back then wasn’t a member of the party. There was lobbying from several sides and a setting had truly been created for Macedonia to finally have a president from among the intellectuals”, says Pavlovski.

The court administration continues with its strike, while today they did not block the streets. From the Labor Union of UPOZ they say that the Minister of Justice is still deaf to their demands. This weekend they will decide on what kinds of protests they will start from Monday, whereby the strike will not end until the salary supplements have not been enacted into law.

The Special Prosecutor’s Office put the following people on its list of suspects: the leader of VMRO-DPMNE Nikola Gruevski, the Former Minister of Transport and Communications Mile Janakieski and the Mayor of Gazi Baba Toni Trajkovski in regards to the case of tearing down “Kosmos Center”. Katica Janeva requests for the Criminal Court to establish precautionary measures for them, after which the former Prime Minister will probably appear for questioning in the court for the first time.

The latest survey of the International Republican Institute (IRI), with headquarters in Washington, DC shows that the political instability in Macedonia is rising, while the trust in the institutions is declining. According to this survey, the support for President Gjorje Ivanov has declined from 4 to 2%. 64% of respondents do not approve Ivanov’s decision to pardon politicians involved in the wiretapping scandal. The most trusted institution among citizens is the newly formed Special Prosecutor’s Office, for which 63% of the respondents said they support its work.

The negotiations will continue

Aivo Orav and Jess Baily back in action – after the departure of German MP Johannes Haindl, grounds are being set for negotiations, and for the leaders of the four parties signatories to the Przino Agreement to sit again at the negotiations table. The ambassador duo also received the help of SDSM leader Zoran Zaev – who had raised an initiative for holding a meeting with the remaining leaders. However, despite Zaev’s initiative, in the beginning the negotiations will most probably continue at the party level, within the framework of the working groups, under the mediation of Orav and Baily. It is expected for the leaders to meet after that.

The MOI has an obligation to protect the citizens

“The Ministry of Interior has a legal obligation to guarantee the safety of the citizens when there are public events, gatherings, protests…”, says legal expert of CIVIL – Center for Freedom, Sandra Gavrilovska.

Pavle Bogoevski, an activist of the Colorful Revolution, stated that yesterday’s blockade had not been reported in the MOI, thereby, the constitutional right for an unreported protest was exercised, but that the locations of the blockades had been communicated in advance with the police. Still, this does not mean that the police should stand aside and not take any action.

The Colorful Revolution is counting down

Protestors of the Colorful Revolution reminded of their ultimatum with a guerrilla action, and at the intersection near the SPO wrote a large “nine”, for the days remaining to the deadline for their demands – June 18.

CIVIL publishes this news digest of main events, opinion and other important and interesting news with an aim to contribute to objective information on the events and processes, including events that some media in Republic of Macedonia do not cover or provide very little information. Your opinion is very important to us. Please send your comments, suggestions, information, photos and videos to our Facebook page or by e-mail at: monitor@civil.org.mk 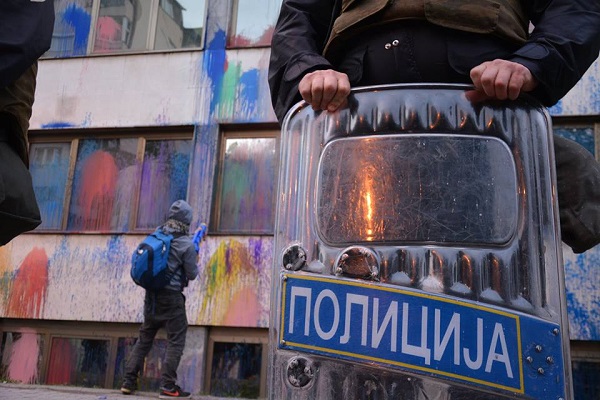 Colorful Revolution: There will be justice in ...