Ethnic violence from the beginning of the year have shown once again that the situation in Macedonia is on the edge of control. School days brings fear and uncertainty to many. Civil – Center for Freedom has responded right away with strong support to peace activities and with numerous calls for peace and dialogue in the country, proposing concrete steps for preservation of peace and confidence-building in the country

VIOLENCE | Five men have been killed near Skopje [Macedonia’s capital]. The victims are four young men (late teens and early twenties) and a 45-year-old. They were found on the shore of a lake near Skopje on April 12, in the eve of the Good Friday, before one of the biggest Orthodox Christian holiday of Easter.
Victims were gunned down in a professional manner, the Interior Ministry said the first day. Media speculations in the country and in the region didn’t help the situation, which was already very delicate. Hundreds of villagers protested in the days after, demanding justice, taking Albanians responsible for the killings, throwing stones at their cars and houses. Several other incidents targeting Albanians and Muslim symbols took place in the days that followed. In Skopje, over one thousand young nationalist hooligans (sports fan clubs) took the streets with an attempt to cross the river of Vardar dividing the capital along ethnic lines. Riot police were deployed in order to prevent serious ethnic violence. Two police officers were injured and several protesters were taken into custody following the unrest.
These events follow the string of ethnically motivated violent incidents in the past several months. One of the most serious incident took place in the beginning of March when a group of masked men armed with baseball and metal sticks brutally attacked several ethnic Albanian students on a bus in Skopje.
Up to four thousand people took part in the March for Peace was organized by an ethnically mixed group of citizens who were supported by around 70 NGOs and over 50 public figures. [please, visit www.civil.org.mk for more information/analysis]
ARREST | Back to the murder of five, only a couple of weeks after, on May 1, the MOI announced that 20 suspects are in custody as a result of the police operation “Monster”. The operation alleged that perpetrators are members of an Islamic terrorist cell.
This latest development brings a new light of the security situation in the country, as well as new risks in the sphere of interethnic relations. Moreover, serious doubts on the credibility of the police action were raised immediately after these news. Half of the arrested persons were released the next day. There are only three persons in custody now. No charges were raised against the released ones. Complaints of illtreatment were raised by several of the arrested persons. In its statements from the beginning, the MOI has violated the presumtpion of innocence entirely.
This all makes civil society’s activities much needed, particularly having in mind its high visibility and capability to bridge ethnic, religious and other differences in the country.
PEACE ACTIVITIES | Recent events of ethnic violence have shown once again that the situation in Macedonia is on the edge of control. School days brings fear and uncertainty to many. Civil – Center for Freedom has responded right away with strong support of peace activities and with numerous calls for peace and dialogue in the country, proposing concrete steps for preservation of peace and confidence-building in the country. These are excerpts of the most recent ones:
Peace will be preserved only by taking urgent measures to calm the situation and restore peace and confidence.
These days are tough for many, tragedies and terrors have mounted, and divisions are more apparent than ever in the past few years. Now, individuals and groups from each "side" believe they are more damaged and should yet retaliate. Wrong! Wrong and dangerous!

Families that experienced tragedies go through difficult trauma and pain for the murdered ones. Now we need to focus on helping them stay strong and dignified in grief. We all have to sympathize with them, calm and dignified, as befits one of sorrow and sympathy. Pain has no ethnic, religious or any affiliation. Solidarity and humanity belong to all and is shared equally by all.

We must look to the future and draw lessons from recent bloody Balkan and Macedonian history. Other Balkan countries take large and quick steps towards the European family, to progress, with open borders and without complexes.
Before us, starting today, even in the hour in which you read or hear this appeal, we face difficult and complex tasks that we must begin doing at the same moment. Some of those tasks are urgent and short, some long-term, but all need immediate action. Many tasks and projects that need to be started are not mentioned here, but we expect you to contribute.
APPEALS | Civil issued several appeals. Here’s a sellection of the previous appeals. (see the latest appeal on page 17).
To all Citizens of the Republic of Macedonia:
Refrain from hate speech. It is just one step away from unimaginable tragedies.
Obey the law, public order and peace and demand that from your immediate family members.
Be active in the prevention from violence in your communities.
We appeal to parents and teachers:
Talk to children and young people, ask them to remain calm and act responsibly.
Demand from them to listen and not to risk their future and future of the whole country.
Demand from them to identify the profiteers in those who call to violence.

We appeal to the Government of the Republic of Macedonia:
Take immediate measures to put an end to hate speech and violence applying the Constitution and laws of the Republic of Macedonia, especially anti-discrimination law and sanction dissemination of national, religious and racial hatred.
Immediately begin implementing the Integrated Education Strategy. The Strategy was adopted in 2010.
Strengthen the sector of police prevention. Expand and accelerate projects to strengthen trust and cooperation between police and citizens.

Strengthen the activities, measures and projects in the field of arms control. Continue supporting projects within the civil society in the field of arms control, risk education, and overcoming gun culture.
We appeal to the Broadcasting Council of Macedonia:
Immediately sanction media that promote hate speech.
We appeal to political parties:
Issue an immediate demand - in a clear and unambiguous manner - to members and activists to contribute to calming the situation in their communities.

We appeal to editors, the Association of Journalists of Macedonia, other media and journalist associations to call upon their members/co-workers to practice accountable and impartial reporting.
We call on religious leaders to immediately stop preaches in which directly or indirectly inspire to violence.
We appeal to all organizations of civil society, regardless of their mission and statute, to take immediate actions that will contribute to calming the situation, immediately and without delay.
We appeal to all sports clubs supporter groups: STAY HOME! This situation is too serious to be dealt with the vocabulary and methods of your groups.
Peace is everyone's responsibility. Therefore, we appeal to all together and to everyone individually:
Do something for your future and the future of your child.
Support Peace in Macedonia! Today! Now!

Stones and calls for vengeance won’t bring anything good to anyone. Street justice will bring more tears, suffering and death. Condemning all Albanians for crime of individuals is a serious felony, too. And vice versa, taking all Macedonians responsible for crimes when Albanians suffered or lost their lives is absolutely wrong. Everyone needs to stop accusing the “others” and get out of the vicious spiral of hate and violence. It’s extremely difficult to put broken windows together, take words of hate back, build bridges between neighbors when they are torn down. It only takes a moment to destroy; it takes time without end to rebuild.
The state institutions have to manifest high ethical and professional attitudes and bring criminals to justice. The police needs to remain calm and professional; politicians and community leaders need to be cooperative and wise. Institutions must work properly and in harmony with justice, law and order, respecting human rights and freedoms. That is how confidence will grow, and weapons will be expelled from homes.
We all need to remain dignified in these difficult times. A crime against one man or a woman is a crime against all of us, regardless of the ethnic, religious, racial or social background. If we all think of this today, we save ourselves from disgrace and crimes of false accusation. We will be saved from the insanity of violence that hurts all of us and the generations to come. (Xh. Deralla)

Compiled by the Civil team 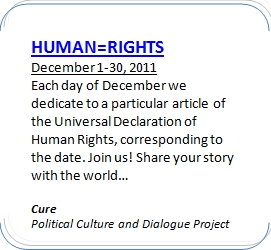