Home›Archive›SEC accepts only one complaint, VMRO-DPMNE claims it too is unlawful!

SEC accepts only one complaint, VMRO-DPMNE claims it too is unlawful!

The State Election Commission on Saturday, after several days of painstaking work behind barricades protected by special police forces and under the pressure of the crowd of protesters on the street in front of the building of what once used to be the daily newspaper “Nova Makedonija”, finally accepted only one of the complaints filed by BESA, two complaints were withdrawn by the submitter – SDSM, whereas the other 13 were all rejected. However, the Executive Committee of VMRO-DPMNE announced a proclamation that the “SEC had reached an unlawful decision with the purpose of cheating the will of the people”, and leader Nikola Gruevski stated in front of the protesters that if the Administrative Court does not correct the decision of the SEC that “VMRO-DPMNE would not accept the results from the election reruns and would not participate in the reruns”.

Those who are dissatisfied with the decisions of the SEC have 24 hours to appeal to the Administrative Court, which has a deadline of 48 hours to decide and officialize the results of the early parliamentary elections that were held on December 11.

Hence, the responsibility is transferred to the Administrative court, and following the speech of VMRO-DPMNE leader Nikola Gruevski in front of protesters, who according to their statements have been “defending Macedonia” and “the will of the people” for three days, “spontaneous” protests can be expected to continue in front of the court as well.

Yesterday, with four votes “for” and four “against”, because SEC member from DUI exempted himself from the voting, and following an entire day of debate hampered by the chanting of protesters, the last complaint filed by SDSM in regards to polling station 2011 in Tearce was also rejected, even though the party claimed that the ballot that had been taken out of the polling station and used for “Bulgarian train”. Consequently, with 6 votes “for” and 3 votes “against”, the SEC accepted only the complaint of BESA concerning irregularities in the voting in polling stations 0961/1 in Gostivar, where Fatime Sulejmani was prevented in realizing her voting right because someone else had previously voted instead of her, which was proved with the expertise of a graphologist.

The election rerun in this polling station can alter the final results of the number of seats won from Electoral Unit 6, as the difference between VMRO-DPMNE and SDSM is “slim” and is around 300 votes.

The ruling party reacted to such a resolution.

“The Executive Committee of VMRO-DPMNE has made a proclamation during a session, in which it says that the SEC has made an unlawful decision with the aim to cheat the will of the people, and that the work of the SEC has turned into parody”, said Nikola Gruevski to his supporters who were putting pressure on the SEC with the several days of protests, chanting and threats. According to him, “the unlawful decisions of the SEC can be corrected by the Administrative Court, who he urged not to allow interference by anyone.

Gruevski threatened that “if the Court should also confirm the unlawful decisions of the SEC, that VMRO-DPMNE would not accept the results of that election rerun and would not participate in the rerun!”.

We are the media 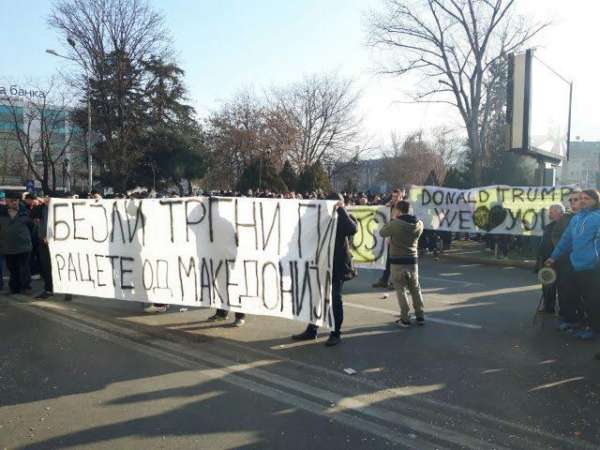