CIVIL FEST is a thrilling multimedia 48-hour event in honor of citizen journalism and activism that is held on December 10 and 11, on the occasion of International Human Rights Day and the 70th anniversary of the adoption of the Universal Declaration of Human Rights. 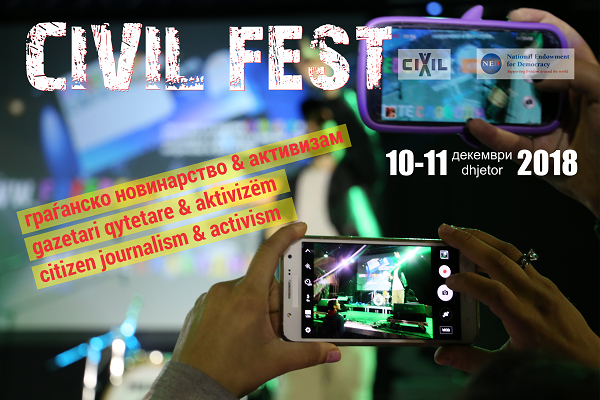 Concert and DJ performances, multimedia exhibitions, poetry performances, video projections, presentations, awarding ceremony for citizen journalism and much fun and entertainment are part of the CIVIL FEST program, organized by CIVIL, with the support of National Endowment for Democracy.

Citizen journalism and activism are changing the world. Dedicated and bold, they reveal corrupt and violent autocratic regimes around the world, and call for democratic changes. This is a time when calls and demands for respecting human rights and freedoms receive both local support and global visibility, despite the attempts of the structures of power to protect their obscure deals and anti-democratic practices.

Thanks to global advances in technology and communications, today, every individual can get involved in local, national and global movements for support of human rights, democracy and the rule of law. It is not an easy task, because they are opposed by the industry of fake news, widely spread hate speech and sophisticated media machineries for manipulation. But, the struggle continues, and hope is precisely in the activism, whose strong weapon is exactly citizen journalism.

In anticipation of CIVIL FEST, citizen journalists are invited to send their texts that will be published on CIVIL’s media platform, and will receive the opportunity to be winners of valuable prizes.