Home›Archive›Chaos in and in front of State Election Commission: VMRO-DPMNE threatens riots!

Chaos in and in front of State Election Commission: VMRO-DPMNE threatens riots!

The State Election Commission at noon today will continue the session on reviewing the complaints filed by BESA and SDSM. The atmosphere that was created last night in front of the SEC building by supporters of VMRO-DPMNE, some of who even came from the interior of the country, signaled escalation of tensions, while the hate speech, insults, curses, nationalist provocations, firecrackers, and also the shooting, along with the threats to the “servants of the foreign services” and to the unnamed ambassador, have only reinforced fears in that Macedonia is facing new tensions and challenges.

At the marathon session of the State Election Commission, instead of polemics of professionals and experts, journalists, observers and viewers were able to see the obvious party wickedness of the members, which initiated almost all of the disagreements.

Last night, the SEC rejected the first two complaints filed by SDSM concerning polling stations 2010 and 2025 in the Municipality of Tearce, in the Sixth Electoral Unit, in regards to the minutes that were changed and the discrepancy in the numbers of voters with the distribution of voters. Insight was made into the election material in regards to the complaint for polling station 2011 in Tearce, suspected of “Bulgarian train”, when instead of having the voting interrupted, it continued to the end.

During the session, outside in front of the SEC building, which was guarded by police forces, “self-organized” VMRO-DPMNE protesters gathered “spontaneously” so as not to allow for the complaints filed by SDSM to be accepted, which could possibly lead to a different outcome of Sunday’s elections and a redistribution of seats in favor of the opposition. Furious because “someone wants to steal the victory”, in minus temperatures, protesters sang patriotic songs, but also cursed, chanted and shouted out nationalistic insults and provocations for the ethnic Albanians, and while oboes and drums were echoing, they also danced to folk music and lit up a fire… The SEC, after reviewing the ballot box, unanimously, with nine votes “against” also rejected SDSM’s third complaint concerning polling station 2024 in the Sixth Electoral Unit, while officials and list carriers of VMRO-DPMNE outside were encouraging the mass of protestors, with the message that “they have the strength to respect democracy” (!?), that there is no turning back and that they would stay in front of the SEC until “August and in July, if necessary”. Members of the SEC proposed by the opposition were pointlessly stating that what was happening outside was a “disgrace for Macedonia”, their work continued under the strong pressure of the mass of protestors, whose threats could even be heard in the broadcasting of the session.

Previously, seven of BESA’s eight complaints were rejected, whereas for the last one, the signature of citizen Fatime Sulejmani will be examined by expertise in order to verify if the signature is authentic or if it has been forged, who, according to the complaint, was not allowed to vote after someone else had voted instead of her.

For VMRO-DPMNE such a decision is scandalous, and the party demanded the SEC to have it withdrawn immediately. In this context, SEC party member from VMRO-DPMNE, Silvana Boneva, requested for this citizen to be put on a lie detector, for which the other members of the SEC disagreed.

Following the rejection of BESA’s complaints, Arianit Hoxha, member of the party’s central presidency stated: “It was very painful to watch how the Albanian representatives in the SEC, those from DUI and DPA and the one who is supposedly independent, were defending the interest of VMRO-DPMNE and of Nikola Gruevski, even more than Gruevski’s representatives in this Commission. Dear activists of DUI and DPA, we feel very sorry for you, but today your representatives in the SEC did not take away an MP from BESA, they took away an MP from the Albanians in Macedonia, and gave it to Gruevski. This is what we were telling you before the elections: a vote for DUI is a vote for VMRO and for Gruevski”.

Where will your souls go? 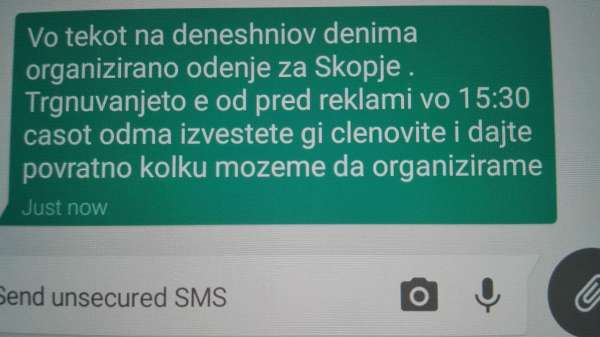 Mobilization of VMRO-DPMNE for pressuring the SEC ...