Home›Archive›Ambassador Althauser: Elections are just one of the many steps to regain the EU perspective

Ambassador Althauser: Elections are just one of the many steps to regain the EU perspective

Speech by H.E. Ambassador Dr. Christine D. Althauser on the occasion of the Conference on political crisis and pluralism in the Republic of Macedonia (Skopje, 17 March 2016).

Thank you very much for inviting me to address you on a very hot topic. I really welcome today’s event.

You asked me for some introductory remarks on a very broad topic. You will have three rounds of questions / themes, on the overall situation, on the Przhino agreement and on key obstacles. A very diversified agenda indeed.

Let me start by saying that I do like your organisation’s name: CIVIL. The latin background is linked to civis, citizen – at any rate to somebody participating in the political process, arguing, demanding and defending his rights as a citizen. The differentiation in France between citoyen and bourgeois is the point of the matter: The bourgeois may have some rights in terms of property rights, but it is the citoyen who is advocating as well for participation as for equality, freedom and solidarity. Plurality of views and opinions is key to a vivid democracy. Only through competition of concepts the most suitable one can be found. An opposing view is not a threat but should be seen as an invitation to debate and exchange. A vivid civil society is a decisive ferment for the society as a whole and for the political system in particular.

Civil society has widely embraced this concept as I could witness by participating in many different events. What’s missing is the link between those many good ideas, which have been articulated, and implementation. I encourage you to make every effort to hold the deputies from your region or your town accountable.

The Przhino agreement is alive and some parts have been implemented. Many others are still pending. Nobody knows whether there will be elections on the 5th of June. It is Igor Strawinsky's birthday, anyway – that is for sure.

Joking apart, elections do not mean the end of the process, but are just one out of many steps which the country has to take to regain its Euro-Atlantic perspective.

Any government that emerges from those elections will be held  accountable regarding its Euro-Atlantic policies based on the commitments stipulated in the agreement. Those include the Urgent Reform priorities, the Priebe Report and the recommendations contained in the progress reports.

In the short term, the clean-up of the Voters’ list, balanced media reporting and the separation of party and state –meaning an end to voter intimidation by public and state officials- will be crucial to at least take the hurdle of credible elections. Some steps have been taken, but further progress in all three areas has to be achieved to give all political parties a fair chance in the elections.

One very welcome step was the extensive scrutinizing of the Voters’ List by the citizens. Now citizens have to follow up on their complaints and ensure that the State Election Commission acts according to their will. I hope that the current activism will be preserved and will lead to stronger citizens’ involvement in other political fields as well.

The German Embassy is proud to support the “Free Election for Free Citizens” project which has created a high awareness nationwide of the issues at stake and the possibilities citizens have to make their voices heard. The Project “Forward” provides long-term monitoring and elections observation, citizen Mobilization and civic education and awareness-raising.

Keep up the good work and every success in the continuation of the project!

I will end up here, wishing you all the success, a good and fruitful conference today – and of course all the best for your future work. 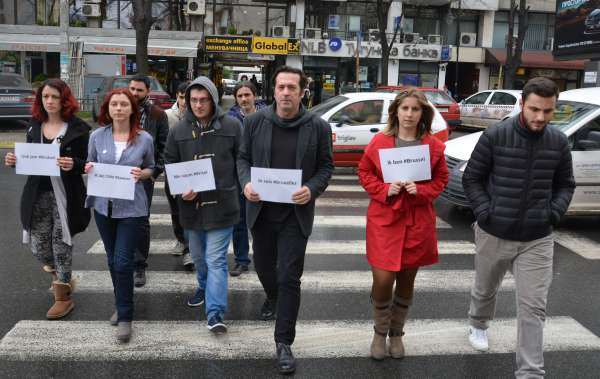 A minute of silence for #Brussels